Hazardous to your health

Do check out Sweetnicks new site it looks wonderful. She also has some fun foodie news. Now here's our Weekend dog blogging with a tale.

First Buddy would like to wish all his fans a happy 4th of July. Don't forget to wear sun screen and be safe with the fireworks, remember the little doggie ears need protection. This handsome pix of Buddy was taken by his Aunt Doodles. 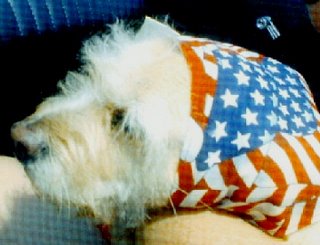 And now, the tale:

Our Mother/Grandmother Lorna was a great "basic" cook. Most of what she did was without a recipe because she'd cooked them so often. We all had our favorites. What she could throw together at a moments notice was pie and she excelled at that for sure. The one important thing I learned about pies is the bottom crust has to be set before the filling bubbles or you'll have a doughy mess on the bottom. Yuck, done that so crank up that oven for the first 15 minutes for sure.

The following recipe she acquired while standing in line at the market. I always laugh at this but you'd have to know her. This I've used in a number of variations and yesterday it won an award. We attended a early 4th bbq and every one was encouraged to bake an apple pie. I made a rustic apple tart and used momma's dumpling sauce and came away with first place. Not too bad, there were seven other contenders. Thanks, mom.

My Rustic Apple Tart was pastry dough in a 12 inch circle topped with sliced apples I'd sauted in a bit of butter then added sugar, cinnamon, lemon juice with zest, and nutmeg. Dusted this with flour and cooked it all until it thickened a bit.

After mounding the apples on the dough pull up the sides about two inches and brush with egg wash, dust with sugar. Bake pretty hot for about 15 minutes, 425; then 350 until done. This was baked on parchment paper on a cooky sheet.
Posted by Deborah Eley De Bono at 6:25 AM

cousin buddy and momma's apple dumpling sauce all in one blog ~ how cool is that!

Number #1 out of seven ain't too shabby. That is amazing, and so is this dumpling recipe. Thanks and congratulations on your victory!

Welcome, pull up a fork
Learn about the PBE women and our honor; Blog of Note.